Join us for our upcoming Zoom Training: There is More to Eye Tracking Than Meets the Eye
Tuesday February 14 th , @ 3pm ET
Register HERE

Learn more Get to know us

WE BELIEVE the ability to connect and communicate with family, friends, and the broader world is a critical component of the human experience. No diagnosis should be allowed to rob an individual of this possibility.

OUR MISSION is to enable and empower people with neurodegenerative disorders to communicate by removing the barriers between them and assistive technology.

In the United States there are over a million people struggling from the impact of neurodegenerative diseases, including amyotrophic lateral sclerosis (ALS), multiple system atrophy (MSA), muscular dystrophy, multiple sclerosis, Parkinson’s disease, and others.

These diseases can leave a person’s cognition intact while destroying their ability to move and communicate. Without assistive technology these individuals are left unable to express even their most basic needs.

The process of accessing & ordering these technologies is overly complicated

Bridging Voice assists people with neurodegenerative diseases with their computer access and communication technology needs at every juncture. We educate clients, their families and health practitioners on available communication options, streamline the process of accessing special technologies, and provide ongoing support, training, and customization to maximize every client’s quality of life. Through a range of personalized services, we help lift the technology burden off their shoulders.

Check out these videos to learn more about how we’re helping ALS clients and their families. 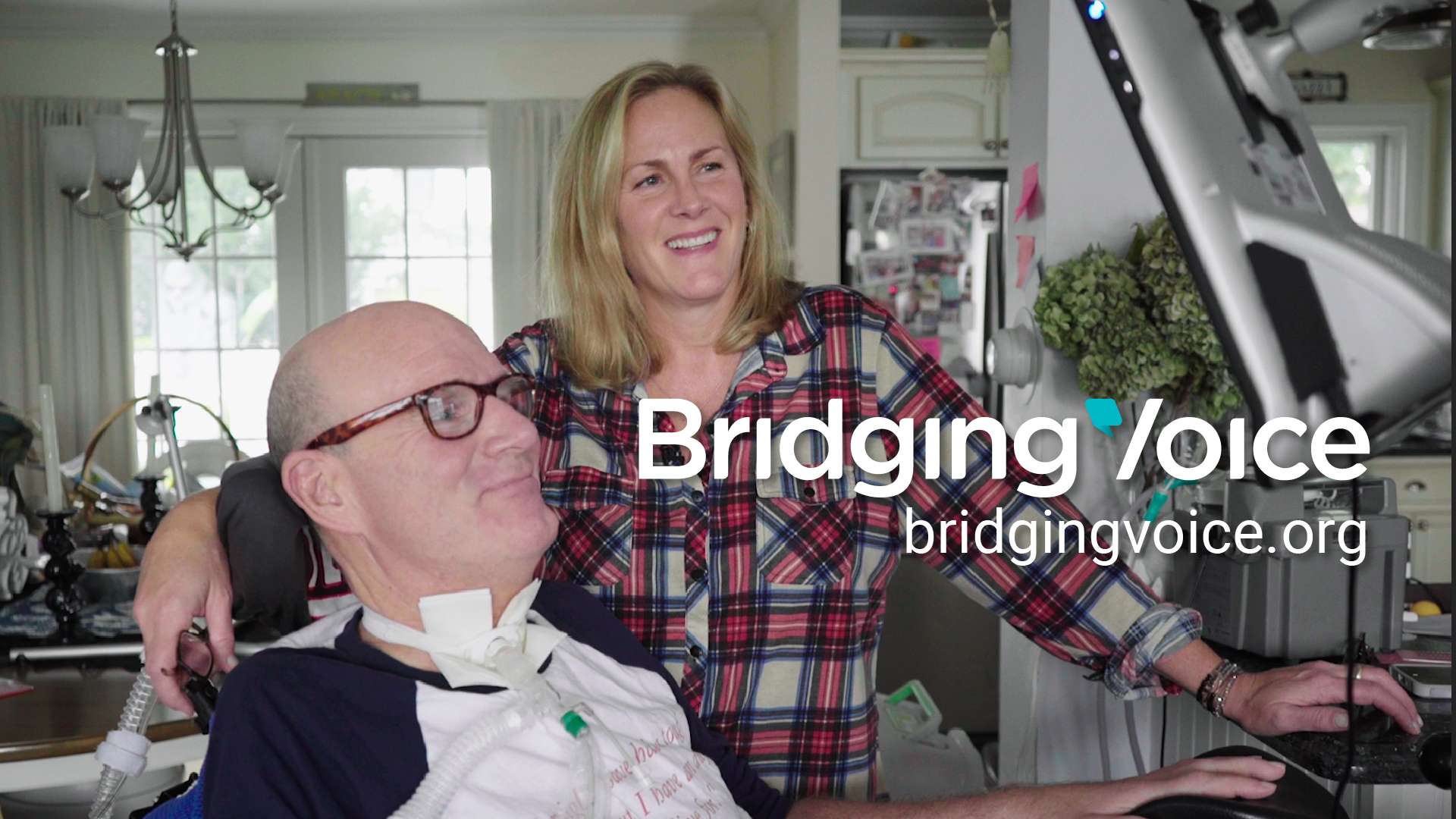 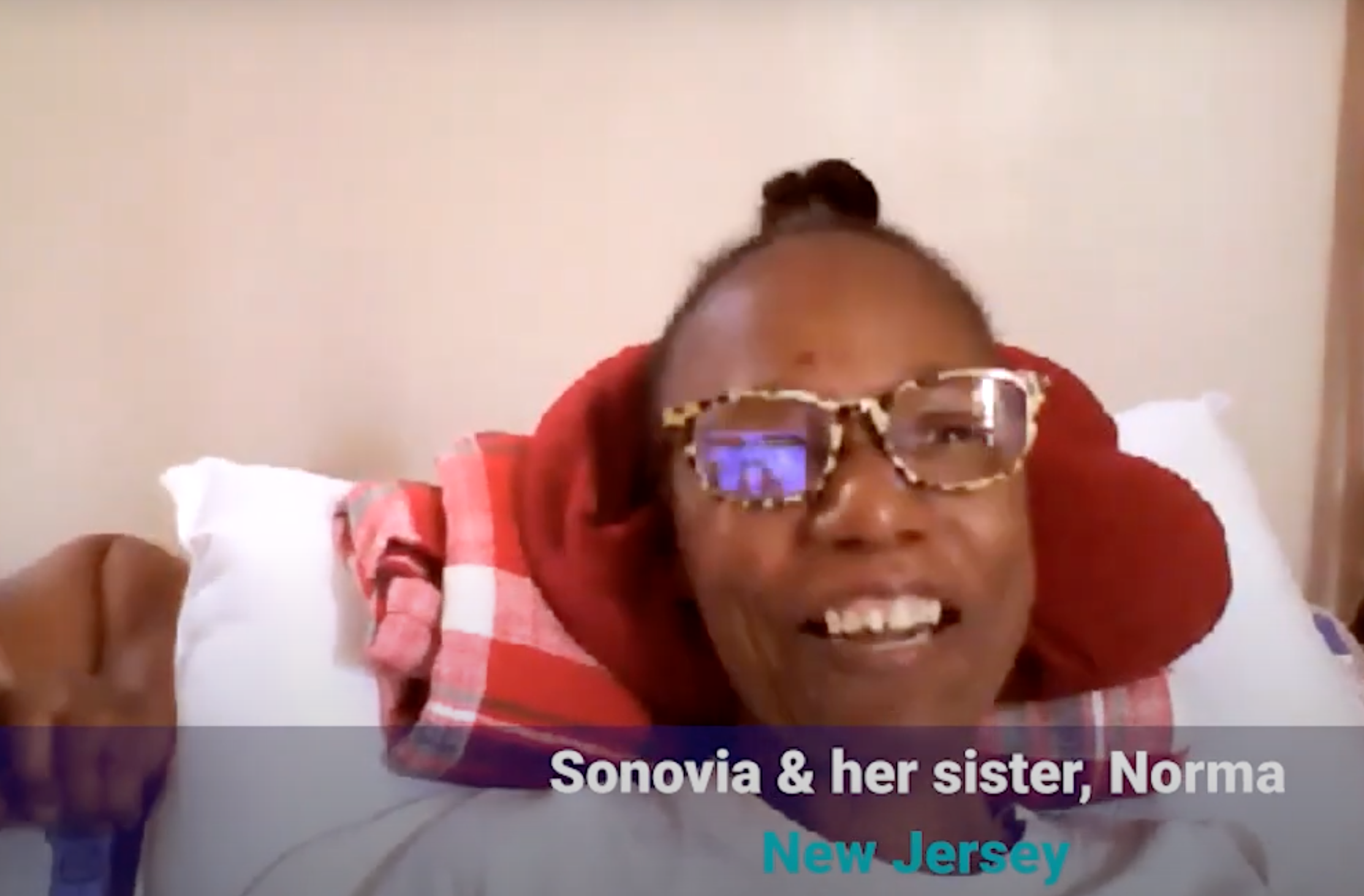 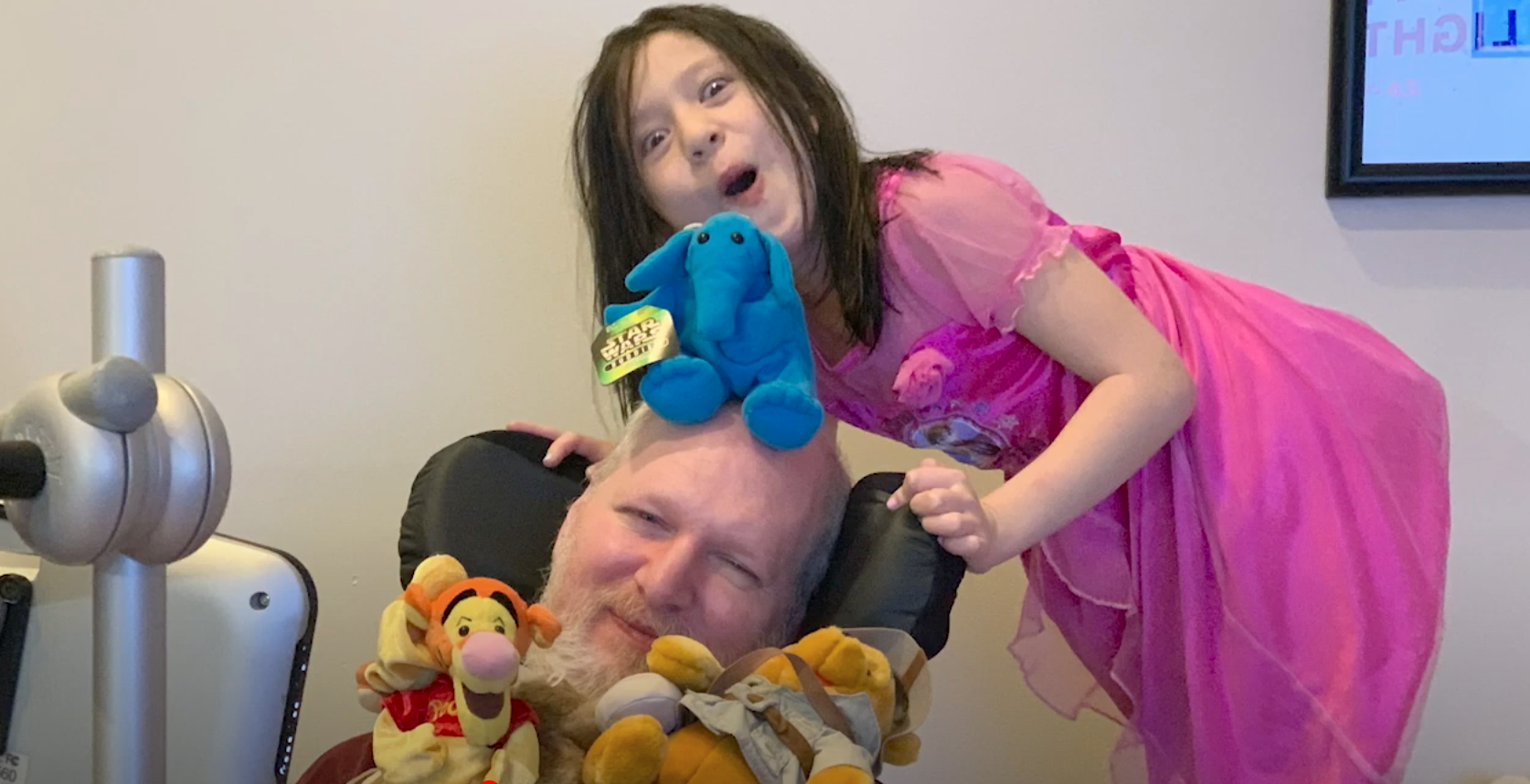 As a recipient of your services and on behalf of all pALS, I want to thank you for helping us live instead of just being alive. 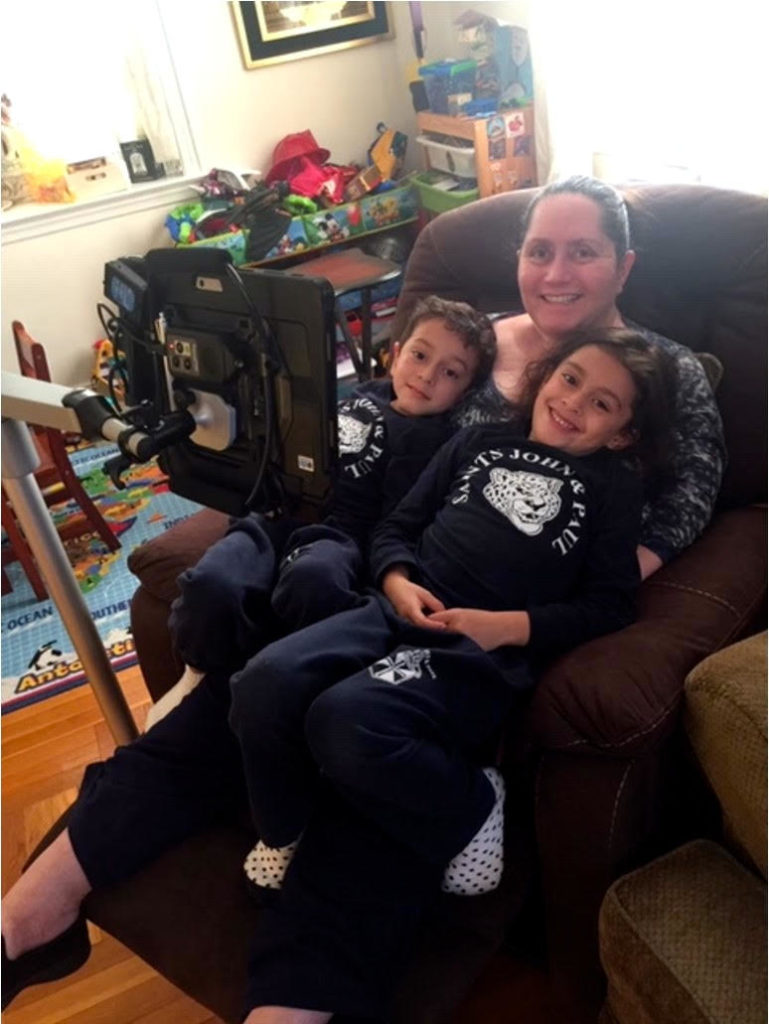 Bridging Voice is an amazing organization that has been so supportive and caring about my needs.  They also gave me fun ideas on how to use the computer to play and interact with my four and five year old children.  I’m now able to tell them to clean up their toys in all different types of voices until they listen!

Without Deb, Bridging Voices, and their never ending help I would not have been able to write this message. 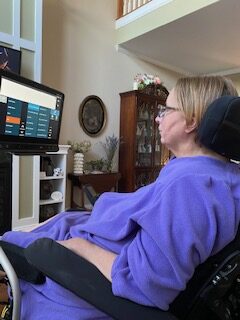 I don’t feel as isolated. They helped me through this process during a pandemic. I am so grateful to Bridging Voice and Debra for all their work during this stressful time.

It is thanks to the generosity and vision of Bridging Voice that I am currently able to speak, text, and email

Get to know Debra

Debra J Zeitlin is a speech-language pathologist with a specialty in assistive technology and over 40 years of experience evaluating and providing communication solutions for people with acquired disabilities including ALS. Debra worked for 35 years at the Helen Hayes Hospital, where she most recently served as the director of the Center for Rehabilitation Technology (CRT) from 2006-2017. Debra was responsible for redesigning the CRT to include an extensive demonstration center that provides state of the art assistive technology and educational outreach to the community. Debra has worked on the issues of augmentative and alternative communication on the state and local level, including co-directing a project with the NY State Office of Health Systems Management for revision of Medicaid funding for augmentative communication devices, and developing the curriculum for the statewide dissemination/education of these guidelines. In 2007, she was instrumental in the creation of the Program for Translational Neurological Research (PTNR) at the Helen Hayes Hospital, and between 2008 and 2013, she was the Principal Investigator at the Helen Hayes Site for the NIH-sponsored project, “General Purpose Brain-Computer Interface (BCI)”. Debra has made numerous presentations and published articles on the importance, impact and potential for augmentative communication, assistive technology and BCI.

Get to know Karina

Karina Nagin has been working in the social impact space for over 15 years. She most recently served as the Executive Director for a global health non-profit dedicated to increasing surgical capacity across Africa through training and mentorship. Previously Karina worked at the Clinton Global Initiative (CGI) where she consulted corporate, philanthropic, and non-profit leaders on issues of humanitarian response, health and education. While at CGI Karina oversaw the Democratic Republic of the Congo Action Network, helping facilitate cross-sector partnerships throughout the region and lead an initiative created by President Clinton to support promising university students through mentorship. Prior to living in New York, Karina worked in India on early stage implementation for several start-ups and social enterprises. She received her B.A. from Pitzer College and Master’s of Public Administration from Columbia University (SIPA). She currently serves on the Advisory Board of Malaika Foundation. Karina was born and raised in Hot Springs, Arkansas, but is now proud to call Brooklyn home.

Get to know Nachum

Nachum Lehman is a System Architect, .NET developer and Network Engineer who has 35 years experience in computer programming and technical problem solving. He started programming in 1981 on a Timex Sinclair with 2k of ram. In 1997, he founded a not for profit to give individuals with disabilities the technical support they required to reliably and consistently use their assistive devices. That initiative still serves hundreds of clients using electronic Braille, augmentative and alternative communication (AAC), accessibility switches, smartphones, voice dictation, and everything in between. In 2006, he expanded these services to serve ALS patients using eye tracking devices. The results were amazing and terrifying at the same time. He quickly realized that many ALS patients were locked in simply because they were never properly trained to use the technology they had. Others were incommunicative because they never received the technologies which could help them. He devoted dozens of hours to each and every ALS patient, hired personnel to develop new and better communication systems for eye tracking devices and was on call 24 hours a day. He lives by the motto “All ALS patients can communicate and connect given the right support at the right time.”

Get to know Eddy Ehrlich

Eddy Ehrlich came to the field of Assistive Technology through his combination training as an occupational therapist and a mechanical engineer.  Eddy has provided direct assistive technology evaluation and training to people in various settings: schools, hospitals and homes.  Eddy specializes in computer access and augmentative communication.  Over the past 30 years he has seen promising emerging technologies transform into powerful products for people with disabilities including voice-control and eye-tracking.  Eddy has been a salesperson and a therapist, but has always seen himself as an assistive technology educator, believing that knowledgeable consumers evolve into more powerful and independent tech users.  Eddy works patiently but diligently to train people to expand their technical skills because poorly implemented technology solutions can be so overwhelming and frustrating.

Get to know Trinity

Trinity comes to Bridging voice with 15 years of experience with pALS and AAC. Previously she has provided services to pALS through a community based home care agency in Portland, Oregon. Trinity has a strong focus in educating other clinicians to provide the best services possible to pALS and cALS.

Get to know Annie

Annie is a speech-language pathologist who specializes in augmentative and alternative communication (AAC). She comes to Bridging Voice with 10 years of experience with AAC and 7 years working with people with ALS. Annie has provided evaluations and trainings for people with all kinds of communication needs in Chicago, Illinois.  Annie feels strongly about early engagement with technology to empower pALS and caregivers.

Get to know Peter

Peter Bloom spent 15 years as a Partner at General Atlantic, where he led technology due diligence on prospective investments and provided technology and risk management assistance to senior management teams.

Prior to joining General Atlantic, Peter was Managing Director of Salomon Brothers U.S. Technology Division where he led the team responsible for recovering the trading capability of 11 firms following the 1993 bombing of the World Trade Center.

He has served as a member of the New York Electronic Crimes Task Force and as a judge for the Lemelson-MIT Invention Award, the Legatum/Fortune Technology Prize and the Roux Institute Fellowship Program.

Peter served for five years on the FCC Technical Advisory Council, with a focus on security related issues. He is currently a technical advisor, specializing in cyber-security, to government and commercial organizations.

Peter is a founding board member of DonorsChoose.org, which has raised over a billion dollars to support public school teachers and students. He is a co-founder and Chairman of Peak Rescue Institute, which teaches advanced rescue skills to first responders in law enforcement, public health and the military. He is a board member of the Cancer Research Institute and an Associate Founder of Singularity University.

Peter is also an advisory board member of Blue Star Families. the Rick Herrema Foundation and and the Connected Warrior Foundation, which are devoted to serving the families of active and injured military service members

Peter was raised in Binghamton, NY and lives in Brooklyn, NY. He graduated from Northwestern University in 1978 with a B.A. in Computer Studies and Economics. In 1987, Peter and his wife retraced Napoleon’s route from Poland to Moscow on their tandem bicycle, but only one-way…and not in the winter

Get to know Yehuda

Get to know Hilda

Hilda L. Applbaum is a portfolio manager at Capital Group, a global investment company headquartered in Los Angeles. Hilda holds a master’s degree in economics from New York University and a bachelor’s degree in economics from Barnard College of Columbia University. She also holds the Chartered Financial Analyst® designation. Hilda serves on both the Boards of Directors of Bridging Voice as well as Hillel International. Additionally, she is a member of the Investment Committee of The Oakland Hebrew Day School and the Finance Committee of the Jewish Community High School of the Bay.

Get to know Nomi

Bergman is a senior executive with Advance where her mission is to seek, identify and invest in companies that help diversify and grow the Advance portfolio. Having spent the majority of her career cultivating growth and innovation in technology, Bergman is uniquely poised to leverage the conditions necessary to create long-term value for her company.

Previously President of Bright House Networks, Bergman was one of the original Bright House Networks founders, who together led the company to become the sixth-largest cable operator in the United States, with 8,500 employees, 2.5 million customers, and over $4B in annual revenue.

Bergman presently sits on the corporate board of publicly held Comcast Corporation and Visteon, privately held Black & Veatch, along with Advance Portfolio investment of Hawkeye360 and Advance owned 1010data. As a board member at the University of Rochester, she remains closely connected to her alma mater. She continues to provide service on the Technological Advisory Committee at the Federal Communications Commission (FCC). And she is honored to serve the follow non-profit organizations, which are dedicated to help create a world where individuals with disabilities are seen for their potential instead of their limitations:  Adaptive Spirit; One Revolution; the USOPF Paralympic Working Group and now Bridging Voice.

Bergman is an avid skier and also enjoys running, swimming, cycling, and hiking. Her real moments of brightness derive from her role as a wife to her husband, Neal, and a proud mother of their three wonderful daughters, Rebecca, Dori and Allie.

Get to know Justin

Justin Ginsburgh joined the board of Bridging Voice following his father’s three year battle with ALS, and he knows first hand how important communication tools are to the quality of life of a person with ALS.

Justin currently works at Amazon, where he leads the Extreme Density team, which focuses on sustainable and efficient delivery in urban areas. Previously, he was co-founder and General Manager of Citi Bike, New York City’s bike share system. In addition, Justin serves as treasurer and a board member of the Friends of Governors Island.

Justin holds a Bachelors of Arts degree with honors in History and Economics from Northwestern University and an MBA from Harvard Business School, where he graduated as a Baker Scholar.